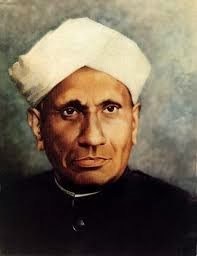 Sir Chandrasekhara Venkata
Raman (7 November 1888
- 21 November 1970) was
an n Indian physicist born in
Tiruchirappalli.
out ground-breaking work in
the field of light scattering,
which earned him the
1930 Nobel Prize for Physics. He
discovered that when light traverses a
transparent material, some of the def
lected light changes wavelength. This
phenomenon, subsequently known
as Raman scattering, results from the
Raman effect and to commemorate it,
February-28 is celebrated as National
Science Day. In 1954, India honoured him
with its híghest civilian award, the Bharat
Ratna.

Sir Chandrasekhara Venkata Raman
By The Biography at July 02, 2019