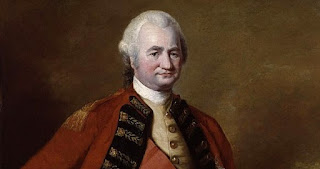 Robert Clive the 1750s and the early 1760s, Robert Clive gained control
of the wealthiest part of the old Mughal
Empire. The Company exacted concessions such as exemption of Company goods from transit duties, which even Indian merchants had to pay. After the Battle of Plassey (1757), the Company got 1.2 million pounds out of which Clive himself took 31,500 pounds besides a jagir which provided an annual income of 27,000 pounds. After the Battle of Buxar (1764), the Murshidabad treasury was looted. The Company acquired the Diwani right in 1765 and became the revenue farmer of the Mughal Emperor.
Share This:
Facebook Twitter Google+ Pinterest Linkedin Whatsapp