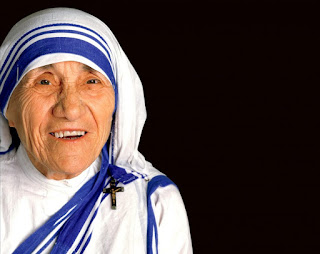 A Mother Teresa was born In Skopje. on 26th August 1910 in Yugoslavia (which is now Macedonia) to the parents Nikola and Dronda. They named her Agnes Gonxha Boiaxhiy - which means a flower bud in Albanian language. Agnes lost her father at a very young age. Her mother being a pious woman brought her up and made her attend mass the church Regularly.

Mother Teresa was given the Padma Shri Award in 1969, the Nobel Peace Prize in 1979 and the Bharat Ratna in 1980. She gave the money that she received from her awards to the centres she had starte Though she had the heart to work always for the needy her ill health did not allow hey She suffered four attacks and on September 5th 1997 Mother left the earth leaving behind many souls in tears Though she is not alive now her vision is still alive throughout the world today!
Born: 26 August 1910, Skopje, Macedonia (FYROM)
Died: 5 September 1997, Kolkata
Tags # bio # Mother Teresa
Share This:
Facebook Twitter Google+ Pinterest Linkedin Whatsapp