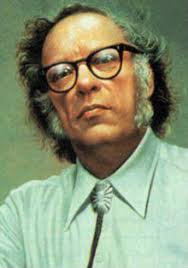 Isaac Asimov, born on January 2nd, 1920 was and American writer and professor of Biochemistry at Boston University .He was known for his work of science fiction and popular science'. Asimov  was a prolific writer and edited more than 500 books, an estimated 90,000 letters and postcards.Asimov wrote a 'Hard science Fiction' along with Robert A. Heinlein and Arthur C.Clarke.He was considered one one of the best science fiction writers during his lifetime.
Share This:
Facebook Twitter Google+ Pinterest Linkedin Whatsapp