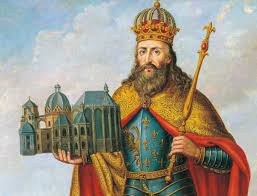 In the beginning of the 9th century AD. (C.E.), A new institution called Holy Roman Empire came into existence in continental Europe. This had nothing to do with the old Roman Empire which
had ceased to exist after 476 AD. (CE). The newly established Holy Roman Empire represented
Christianity and Christendom and, hence, it was designated holy. The emperor was supposed to be
A Representative of God on earth like the Pope. 'Ihe emperor dealt with political matters, while
the Pope dealt with the spiritual. The Emperor was superior to everybody else in the world, except the
Pope. Charlemagne, the king of Franks, was the first Holy Roman Emperor to assume the title (800 AD. (C.E.)). Charlemagne was a contemporary of Pallava king Nandivarman II and Pratihara ruler
Nagabatta 1.